Variety has always been an important part of the East African Safari Classic Rally. A great example is the Trabant P601 entered on the 2015 Safari Classic by Michael Kahlfuss.

Michael started motorsport as a teenager in 1981. Germany was still a divided country and he was living in the GDR. In 1983, he started competing on rallies and drove both Ladas and Trabants – two of the few makes of car available to residents of the GDR – in regional and national championships. In 1990, he was runner-up in the GDR national championship with a Group A Trabant and it was later that same year that Germany was reunified. This meant that he was able to travel freely and compete on international rallies.

Naturally his first exploits were with a Trabant and he aimed high. In a period of four years, he drove the Monte Carlo Rally, 1000 Lakes Rally, Rally Australia and RAC Rally (twice). He started a motorsport company and soon was able to carry on his globetrotting hobby of driving international rallies with various Group N cars such as a Toyota Celica GT-Four and Mitsubishi Lancer Evos. As a regular finisher, his best overall results were fifteenth overall, once in China (1999) and also in Mexico (2005) with an additional Group N victory.

In 1994, Michael decided to enter the Safari Rally and built a Trabant P601 from scratch. With a windscreen header proclaiming his partnership with Toyota Team Europe – TTE flew his Trabant to Africa in their Antonov freighter – he and co-driver Ronald Bauer got up to twenty-first overall and well into the third leg before problems with the steering put them out. Then in 2003, Kahlfuss entered the first Safari Classic using the same Trabant. With start number 53, the duo got it round the demanding nine-day route and finished thirty-second out of forty-two finishers.

Work has recently started to prepare the Trabant once more, ready for shipping to Mombasa in August. The 600cc twin-cylinder, two stroke engine gives a modest 50 bhp but the car’s unitary construction and composite bodywork make it a light car, somewhere around 600 kg. This still gives it one of the lowest power-to-weight ratios of the cars entering the Safari Classic but Michael is not downhearted: “We know the car and the rally. I am only afraid of the mountains when we have to drive in first gear for half an hour. Also for the water crossings as, if there is a strong current, the Trabant could float away very easily.”

There is currently a poll running on a website for Trabant enthusiasts where, at the moment, sixty per cent think Kahlfuss, Bauer and their P601 will not make it to the finish of the Safari Classic in November. “I just want to prove them wrong.” says Michael Kahlfuss. History suggests that he probably will!
Posted in Safari Rally 2015, Safari Rally News and tagged 2015, Drivers, Rally News, Safari Rally, social media. 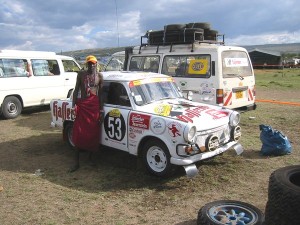